The Kitchen, the Shop and the Yoghurt Bottle. 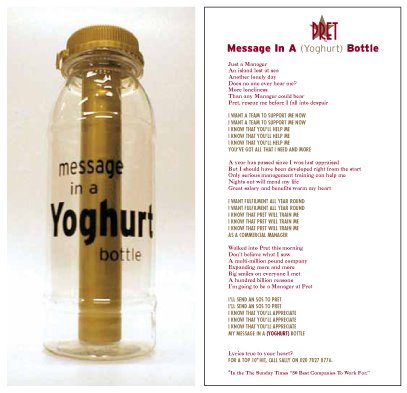 The first thing I ever remember about Pret’s recruitment advertising was standing on the Central Line platform waiting for a train and seeing these huge posters with the headline – “Coffee Maker. £14,400” complete with a photo of a smiling Barista. It was a bold statement and one I found impressive given the average salary for people working in the food and retail industry was hovering around £9-10k. At that time Pret was still a young business but it was making a notable mark on the lunchtime experience for Londoners (and beyond) with its distinctive branding, shop design, fresh food and cheerful team members. It appeared from the posters on London Underground that much of that cheerfulness was coming from an exceptional salary for the industry.

A few weeks later, I received a call from a headhunter asking if I would be interested in meeting Pret as they were looking for a new Head of HR. Initially I declined. I was working in fashion, at Jigsaw, and pushing for some momentum on internal changes. Plus, I was averse to working within the food sector. It was not renowned (at the time) for progressive HR or employment practices and I didn’t feel I could make much of a mark there. Thanks to much persistence from the headhunter I agreed to meet with Pret. And I’m glad I did. There was a level of enthusiasm and passion that transcended the usual “lure a candidate” pitch. The actual pitch was more like (and I’m paraphrasing) – “we’re not interested in doing what everyone else is doing. We want to prove you can have a successful food business through great product and great people. We’re not interested in mirroring what our competitors do. We want you to throw the usual rulebook out the window. Blank slate. Let’s reinvent everything.”

And who could resist that.

Pret already had some unique initiatives in place. As part of the recruitment process, regardless of role or seniority, every individual had to complete an experience day at one of their stores. This meant working as a Team Member (the general assistant position) for the day, learning all aspects of the shop. The sandwiches, the coffee, the customer service. All aspects. With the shop team voting at the end of the day on whether you match the culture. Not gonna lie – wasn’t overly impressed at first with this element but after spending the day at the shop (Piccadilly 1 if you’re interested) it made complete sense. You got to see how everything worked. And how the quality of the food and the customer service was full of thoughtful, tiny, details that really differentiated Pret from its competitors.

Thankfully the Piccadilly team were not put off by a slightly introverted Scot working with them for the day, and so the next step (post offer) was to spend 2 full weeks working in another shop (nearer to where I lived at the time). This 2-week training was another requirement for all new hires, again regardless of position or seniority. During this period, you were trained in more detail on all aspects of the shop. And how to make each product. I was like a ninja with the egg mayonnaise sandwiches (two forks and a lot of attitude). Less so the coffee. Being a Barista in a busy shop requires an admirable level of focus and patience.

It was while I was working in the Kensington High Street shop that it became really clear that there was something special about working at Pret that had not been captured by any of its recruitment advertising. There was a uniqueness to its approach to all aspects of employment that was very special. From the recruitment approach, to the detail in the training, to bonuses, to the weekly parties, to the freedom that shop managers had to resolve issues there and then to ensure a satisfied and happy customer – all of this worked together to create a culture that was truly one of the company’s biggest USP’s.

And it was entirely missing from Pret’s recruitment advertising.

Which brings us back to the £14,400 advert in the London Underground.

This advert generated a huge response. One catch however is that you would only get to £14,400 after many months of training and attaining the level of Barista. Anyone coming in at that level would start at around £10k (at the time). This was not what people wanted to hear when they phoned Pret’s recruitment centre resulting in some abuse for the recruitment team. Nor was it what existing Team Members wanted to see on their way into work when they still had months to go before getting to that level of pay.

And nor did it in any way capture the culture of Pret. Quite the opposite. Time for change. For me culture is something that permeates a business and a good culture will create a differential for both employees and consumers. Think of BA and Virgin Atlantic. Both provide essentially the same service but have clearly different cultures. Could you tell the crews apart in a generic plane, with generic uniforms? I believe you could. That’s culture. But that’s also for a separate blog.

Just before I left Jigsaw, I was approached by a new advertising agency – and Advertising (now known as Andsome). Two experienced advertising execs tired of the culture of large agencies who were branching out on their own. There was something about the little details in the letter they sent that struck me and so I reached out to discuss some ideas about capturing the essence of Pret’s culture in employment branding.

Andsome pitched concepts for both Team Member and Manager recruitment. All concepts used the unique shop branding – the food labels, the flooring design – but it was the copy and the main images from one of those concepts that added something special. Most adverts at that time contained a fairly standard, fairly boring outline of the role available. A job description posing as a recruitment ad.

The Team Member campaign I gravitated to used mirror boards with the simple message – “Can You See Yourself in Pret” with copy that outlined the hourly rate, the parties, the bonuses and other unique aspects of the culture. Importantly the hourly rate was the starting rate and not a headline grabbing number that would take months to achieve. Cough. £14,400. Cough.

However, it was the Manager campaign that really grabbed my eye. One of the key messages I wanted in any campaign was that Pret treated people like individuals. For managers this meant a level of autonomy and local decision making that was pretty unheard of for a food chain.

The advert in front of me had all the afore mentioned Pret design aspects. It also had a group of pygmies in masks with extremely long fingernails. Which was a first. For recruitment adverts I mean. Who knows how many fields around the world have pygmies, in masks, with long fingernails standing around…? The copy outlined the salaries, the bonuses, the unique nature of the culture and ended with “Feel like standing in a field dressed as a strange pygmy type creature with long fingernails? Fil yer boots. We’re all for individualism”.

One key test both concepts passed easily. Would our Team Members and Managers see these adverts and feel it reflected their own experience of working at Pret? After some initial internal testing we were more than confident that they would.

Running the ad was a risk. Would people get it? It was like nothing else out there. People would either love or hate it. We felt that those who loved it however would get Pret. Would get the culture. Those who hated it would likely not be right for Pret anyway. Pret’s consumer voice was peer to peer and so we felt that this employer branding copy and tone was friend to friend. Slightly tongue in cheek with a serious message. As one of the best marketeers I’ve worked with, Morag McCay, would later say to me: “The difference between the consumer and employer brand is the shop to the kitchen. It’s all part of the same thing but you have to tell a different story and experience. What is it like in the kitchen? And we think you’ve nailed that”.

We placed the ad in The Grocer – the main magazine for management adverts in the food industry, at that time. And we waited to see the response.

The ad broke records for both The Grocer and Pret. Pret’s previous record had been something like 64 responses. The “Pygmy” ad reached over 500. More importantly the quality and type of candidates we were looking for was exceptional.

The Pret employer brand was born.

But what about the Yoghurt Bottle you ask? Months after the launch of Pret’s new employer branding, we identified an issue with head hunters, and operation managers, from rival companies trying to poach Pret managers. After all they were the best trained, most motivated individuals in the industry. We were confident that our culture offered a unique experience that would assist with retention (which was at an exceptionally low level for the industry). So, the question was how to respond? How to let other managers at rival companies know what they were missing out on? How to rescue them from the current experience? Why, let’s send them a message. In a bottle. A yoghurt bottle.

Given the ongoing daily approaches to our managers, we felt this was a way to respond with our typical tongue in cheek humor. A specially adapted yoghurt bottle with a scroll inside containing our special message to our rivals’ managers. To be read with the Police’s song – Message in a Bottle – playing in one’s head. A bottle was sent to every Starbucks, Coffee Republic and other rivals in London. Breaking the Direct Mail mould.

It caused a huge storm. CEO’s from our rivals were furious. Our response was that their teams were in our shops every day trying to poach our teams. We were only responding with good humour and a good message. That message got through to those managers with an uptick in our applications.

The best response? The CEO of Soup Opera, a now sadly defunct business, got hold of as many of the bottles sent to his stores as possible, filled them with gazpacho and returned them to us. He got it. And responded with the same level of humour.

Your employer branding is key to so many things but so many companies still get it wrong. Too many internal marketing teams have their hands all over it. Too many times it reflects an experience that employees don’t recognize. The Shop v The Kitchen. Reality v Projection. Does it really reflect your actual culture? How do you know? Always some helpful things to remember. 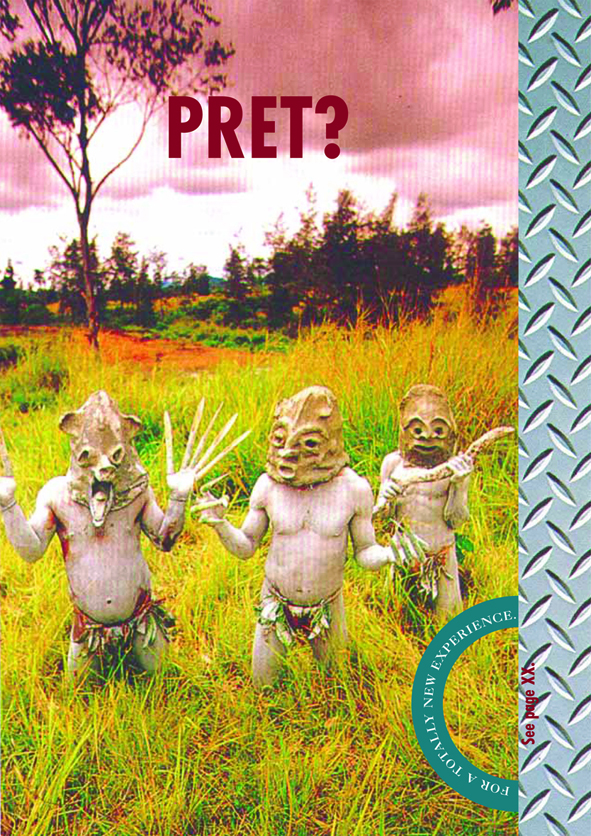 That moment when you get to watch a multi-award winning filmmaker bring your idea to life. 🙏 ...

How was your day? I spent a chunk of time with the woman and sheer creative force behind many movie costumes but the ones that stand out to me (purely subjectively and as a fanboy of the movies) are these 3. I love when I get to connect to incredible talent and hear their stories and inspirations which in turn inspires me. 🙏 ...