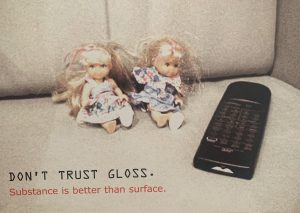 [This is an approx 4 min read]

Substance is better than surface.

In 2007, ITV’s innovation unit, ITV Imagine, ran an internal event called The Future of Entertainment. It focused on trends that were evident, emerging and speculative and these were divided into examples of likely consumer changes 2 years, 5 years and 50 years out from the date of the event.

One of the “wacky” (an internal feedback quote) trends predicted included the rise of streaming content platforms. *cough* One of the other emerging trends highlighted was about the growing trust in brands versus the declining trust in government, and that a time would emerge when brands would play a far more important role in driving social change. This was in the “5 years out” category so it has taken much longer than predicted to arrive, but it seems we are finally in the moment. It’s notable that it has accelerated in the last 4 years – at the same time that trust in government (US) has hit near historic lows.

The image above (creative from andSoMe. The best.) is from an old Levi’s recruitment campaign that I ran when there (early 00’s). At the time we were faced with the challenge of recruiting exceptional sales talent to a company in financial freefall. Levi’s history of supporting social change was something that I felt would be of value in our recruitment campaign in order to find individuals who would be drawn to the challenge of turning around an iconic brand with values that aligned with their own.

Some historical background. Levi’s worked to ensure an integrated work force during World War 2 and beyond. In 1960 they refused to open a segregated factory in the south and instead fought for a desegregated factory instead (a fight they won). This action was taken a full four years before the passage of the Civil Rights Act.

In 1982, Levi’s CEO stood in the San Francisco HQ lobby handing out literature warning employees of the dangers of HIV, while also trying to dispel mounting fears about how the disease could be transmitted. Shortly afterward, Levi Strauss helped fund a pioneering AIDS clinic at San Francisco General Hospital. In 1992, Levi Strauss became the first Fortune 500 company to grant domestic partnership health benefits — a practice now followed by other corporations and public agencies. At the time, it was groundbreaking and controversial for a company of its size. In 2007, the company became the first and at the time only California business to file an amicus brief with the California Supreme Court in support of same-sex marriage.

The company has continued to be focused on equality across the board, including being one of over 200 companies who signed a landmark “friend of the court” brief in 2019 that was filed with the U.S. Supreme Court in a trio of cases that would determine whether LGBTQ people are protected from discrimination under existing federal civil rights laws – which prohibit sex discrimination in contexts ranging from the employment to housing, health care and education.

On Monday this week the US the Supreme Court issued its decision on those cases and recognized LGBTQ rights under the Civil Rights Act. It is a landmark decision and clearly the right one (despite how ridiculous it is that these rights are even still under question). It gives a major glimmer of hope as the fight continues to battle systemic racism in our society. In the US many states are making long overdue changes in response to the massive Black Lives Matter protests happening across the country (and the world). But on the same day the court granted greater LGBTQ rights, they also declined to hear eight cases involving a legal defense called qualified immunity that can be used to shield government officials from lawsuits, including seven involving police accused of excessive force or other misconduct. The fight continues.

The last 4 years in the US has brought a number of challenges to equality – from “religious liberty” bills allowing businesses to deny service to the LGBTQ community (including medical needs), to “bathroom bills” targeting the transgender community, to draconic anti-abortion bills threatening the reproductive rights, and health, of women to making moves to weaken housing discrimination rules making it easier to deny loans to people of color. Not to mention the most recent attempt by the current administration to remove non-discrimination protections under the Affordable Healthcare Act, to make it easier for doctors, hospitals and insurance companies to deny care or coverage to transgender and nonbinary patients. During the worst global pandemic in decades. Though thankfully this latest move may end up being blocked due to the Supreme Court’s decision.

While this may appear like the beginning of a political rant, it is not. It has however been notable how much more involved brands have been in pushing back against the challenges outlined above. This in no way diminishes the incredible work being done by activists and non-profits but clearly the threat of brands like Disney, AMC Networks, Netflix, Salesforce, Apple etc pulling major business from the likes of Georgia and North Carolina was a major influence on those bills being pulled, slowed, shelved or amended.

Brands understand what a major political party does not. Or is in denial of. The demographics are shifting rapidly and have been for some time. The US is becoming more and more racially and ethnically diverse. Between now and 2030, whites as a proportion of the population will get smaller, and the minority race groups will all keep getting bigger.

Not just that but generational shifts are accelerating shifts in attitude. Generation Z is a bigger generation than Millennials. Multi-racial children is the fastest growing youth group in this country. This generation is more mature and in control at an earlier age, and they want to change the world. They want brands to be socially conscious.

For brands, there’s a lot at stake. Consumers want to spend their money with companies with progressive values. According to Edelman – “Nearly two-thirds (64 percent) of consumers around the world now buy on belief. These Belief-Driven Buyers will choose, switch, avoid or boycott a brand based on where it stands on the political or social issues they care about.” And this was in 2018.

The power of the masses and the digital age gives consumers more control and ease to demand that brands do better, to call them out, to decrease a brand’s value. Likewise, brands seen to be doing and supporting the right things can be elevated, recognized and valued. In an age of rising transparency, brands need to consider both their brand and their internal culture to be on full display for consumers.

Even now, you can see the growing backlash against brands who support the Black Lives Matter movement but have failed to act on that support meaningfully before now. From the Condé Nast resignations, to the outrage generated by the CEO of JPMorgan Chase taking a knee despite accusations of targeted discrimination not just by his own bank but other major banks across the US.

Another example is McDonald’s. They issued a solidarity statement for Black Lives Matter, committing to donate money in a stance against systemic oppression but it wasn’t too long before multiple people went online to remind McDonald’s of the class-action suit being filed against it from black and Latino employees concerned about their safety over Covid-19.

Or Nike. They have taken very public stances in their support of Black Lives Matter, drawing praise for their Dream Crazy advert featuring Colin Kaepernick, and for their Don’t Do It advert, but now face fierce criticism for the lack of diversity amongst their top leadership team.

It’s not just how brands are dealing with the current political unrest, but also how they dealt with or are dealing with the ongoing Covid-19 pandemic. Hence the McDonald’s lawsuit. Or even Levi’s who on the same day that they announced a $32 million dividend for its shareholder, also confirmed that the company would stop paying store workers, and place about 4,000 on furlough.

It’s worth noting that Levi’s only went public last year for the first time since 1985 (after a 14-year period of being public, they went private again to protect their values). It will be worth watching to see how this change, with all the additional pressures of a publicly traded company, affects their ongoing approach to social change. Though they should take note of the examples Netflix, also a publicly traded company, has set with their response to both Covid-19 and the Black Lives Matter protests.

Now is clearly the time for brands to take a look at both their contribution to society and social change and how their actions towards their consumers, suppliers and employees lines up with that. Brands are now like glass boxes. Everyone wants to see in. And people are watching.

ITV Imagine classified cultural trends as ripples, waves, and tsunamis. Brands need to see this confluence of political, generational, and cultural shifts as a tsunami of change and an opportunity to be part of this change. To take a hard look at your brand values, your approach to diversity, and your internal culture. Or be left behind.

The final episode of season 1 of Trapped in Treatment is out now. If you have been listening along - thank you! 🙏 If you haven’t listened yet - now’s the time as all 12 episodes are available for a full binge. Available wherever you get your podcasts! Now the work on season 2 begins (Fall 2022). ...

New work. A labor of love. And a new trailer for the work that kept me busy through most of the pandemic. One Perfect Shot executive produced by Ava DuVernay, and, um, me. 😳 A love letter to film by film makers for film lovers. ❤️ Landing on HBO Max - March 24. ...

Gotta love it when a client project comes together. 🙏💖 ...